I bet you were not expecting that were you!  We were given a bottle at Christmas as an alternative to Mulled Wine, and it has sat in the cupboard for the past 9 months, until the other day, I decided I needed to add some Red Wine to the Red Onion Soup I was making.  However, I didn’t have any red wine in (Shock Horror) so grabbed the next darkest non bubbly bottle there was.

It added such a nice depth of flavour, that I decided it needed to be featured in tonight’s recipe of “Daves Chili”.  In case you don’t have any spiced mulled rum to hand, mulled wine or standard red wine can be substituted in this recipe, but I urge you, please go get some!

So for Daves Chili, you need to add to a cold pan of oil a large red onion diced, 3 cloves of garlic sliced, One Red Pepper Diced, and a teaspoon (heaped or more if you like it hot) of Dried Red Chili Flakes. 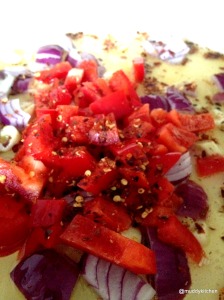 Yes I know that it looks like I have used a lot of oil, but this recipe uses Quorn, and I always find it soaks up a lot of oil.  I have used a good quality olive oil, put over a low low heat and let cook gently for about 10 minutes.

Once the Quorn is added and cooked through until hot, (don’t add any other ingredient at this stage until the quorn is no longer frozen). pour in a glass of your Spiced Mulled Rum (or substitute). 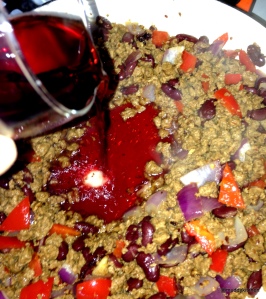 Continue cooking on a Low Low Low heat until all the delicious Rum is absorbed into the quorn, then add 2 cartons of Pasata, stir, and leave to simmer for 30 minutes.

It looks really liquidy right? Don’t worry at this stage it will be rather wet, but you will need to watch it and give the occasional stir otherwise before you know it, it will start sticking to the bottom of the pan.  Incidentally, it takes about 25 minutes for brown rice to cook, so at this stage add some brown rice to the pan of boiling water you have on the go! (Did I forget to mention that part? Sorry!!)

Once cooked, drain the rice, and serve immediately!