No, not the Christmas cake, but the cake that someone has asked me to make for them. Normally I don’t practice a cake, I just wing it, hold my breath and hope for the best. But this cake is different. It’s my first ever cake by request, the flavours were chosen specifically, and it’s for a fairy godmother, so it has to be perfect.

This morning I woke with this cake in mind. My FG wants it for Christmas, but I had one of my “ideas” this morning involving unrolled Swiss rolls!!

I started by making three Swiss roll sponges, one plain, one with walnuts, one flavoured with coco powder. The recipe for the plain sponge is 3 eggs, 125g caster sugar, 125g self raising flour and a tablespoon of warm water. Whisk the eggs and sugar together for 10 minutes, then slowly fold in the flour and finally add the water. This is then placed in a Swiss roll tin and baked in the oven for 12 minutes at 180 degrees.

To make the walnut layer, I added a handful of rough chopped walnuts. ( how very technical )

For the chocolate layer, I used 80g of flour and 45g of coco powder.

Once cooled, I set about making a ginger buttercream, using a basic buttercream mix, 100g unsalted butter, 200g icing sugar, chopped stem ginger and some syrup from the stem ginger. I didn’t make a note of the weights of the ginger or the ginger syrup it was just to taste. I then made another buttercream and added a tablespoon of strong black coffee. 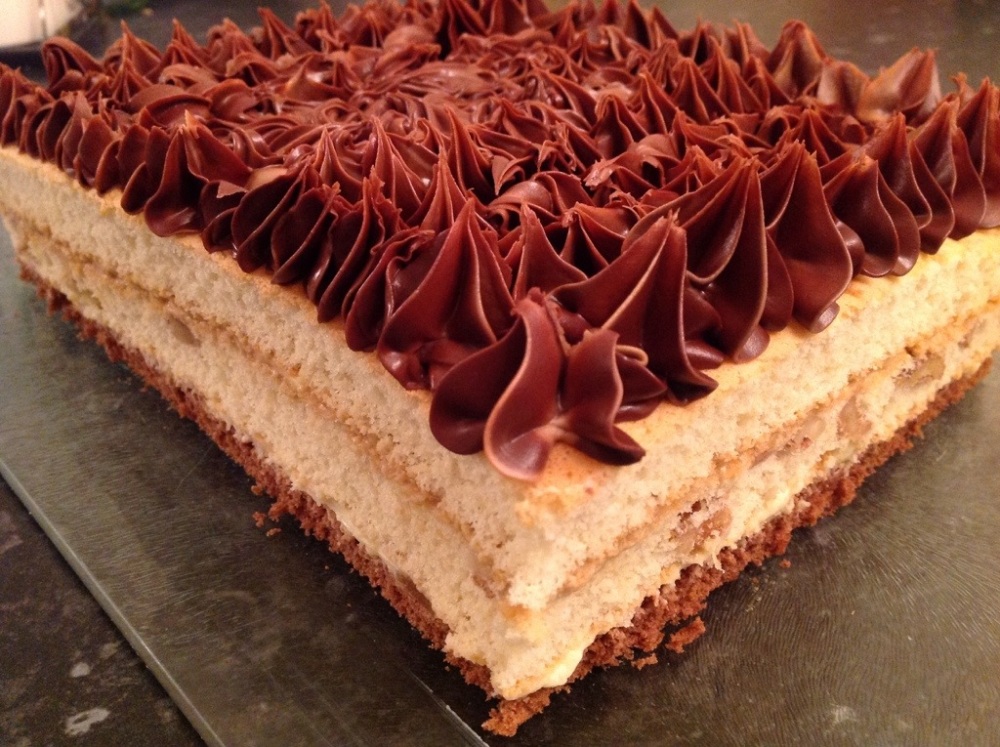 It’s a good job I tried this cake out. The flavours worked really well, very complimentary, but the sponge was just a little too dry. I thought the lightness of the Swiss roll sponge would create a fluffy light cake filled with decadent cream, but it lacked a certain something. So I will try it again, this time using my traditional sandwich tins and a more Victoria sponge basic mix.

Keep tuned, as I will be posting try number 2 when it’s made.